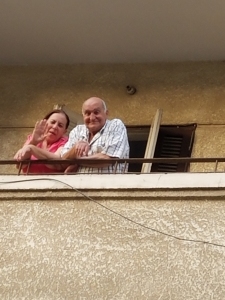 Just a few hours and Egypt will be in our rear view mirror.

When we left Mokattum Mountain, Izzat dropped us off in Bill’s sister’s neighborhood.  Mona had made one of her feasts for us to enjoy when we dropped by to say farewell.  We had a sweet visit with her and then it was time to go.

Somewhere along the way on that final day, I managed to leave my hat behind.  Perhaps it was in the Uber vehicle we took to get back to the Fairmont.  I sincerely regret that, because it had been a loyal servant on the Danube cruise and on this trip.  I’ve missed having it for several trips since.  I also donated my prescription sunglasses to the country earlier in the trip.

I’ve already shared the frustration of our last night at the Fairmont, so no need to revisit that.  Izzat was there the next morning to take us to the airport.  I felt like I was saying good-bye to an old friend.

At the airport, some of the towel-clad pilgrims we’d seen on our arrival were also departing Egypt.  I’m not sure what the trip was supposed to imbue them with, but love and respect for their wives doesn’t seem to be one of results.  I watched a man and a boy in their white terrycloth outfits stand to the side with their arms folded as their mother/wife pulled huge suitcases, too large for her to handle, from the security table to a cart and then struggle again to get the cart going in the right direction.

I would have sent Bill to help her, but he was already on a mission of his own.  A group of giggling ladies in pilgrim caftans and hajibs needed his help with the elevator.  They’d never been on as escalator or an elevator.  They were terrified of the escalator, but baffled with the controls of the elevator.  I was proud of him for helping them, but wished he could have embarrassed the towel-clad men by assisting the floundering woman.  The pair had looked so smug.

Miriam and Bassem were taking the same flight as we did to the States.  Bassem wanted back-up in case Mariam had any trouble in Customs.  We breezed through the London airport with no trouble at all.  At DFW, US Passport Control did bring Mariam in for a short interview, but it was very cursory.  Then they grabbed a rental car, because no one sedan was going to hold all the luggage for four people, especially when one of them was moving here.

And then we were home.  My bestie had kept my cat for me, so we were eager to go claim her.  Mariam and Bassem stayed with us a few days, because Bassem had only bought tickets back to Dallas, not on to LA.  Too soon they’d made arrangements to go home and we were all alone – just us and the cat.

It was quiet and a bit lonely after so many days around our dear family members.  It was a little boring too, after three weeks of activity.  It had been a great trip and like all good trips it had changed me.  I had stronger ties with my nieces and nephews and their children.  I’d overcome my fears and traveled to places the US State Department said I should stay away from.  I’d been in one of the poorest neighborhoods I’d ever visited and discovered that its inhabitants were more joyful and thankful than my affluent neighbors in my golf course community. We will probably never travel to Egypt again, but that’s OK, because now Egypt is in my heart.