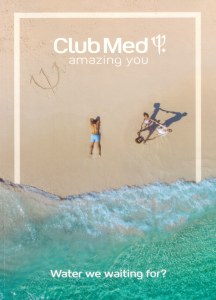 TRAVEL TALK: HOW LONG CAN WE STAY AND HOW MUCH CAN WE SPEND?

My poor husband!  The minute we get home from a trip, I’m already thinking ahead to the next one.  I’m trying to figure out just how quickly I can get him out of town again, how long he will let us stay and how much money I can get away with spending.  So, learning that I’d just won a five day trip to a Club Med resort from CTC, my favorite travel agency, I really only had one question.  When can we go?

Sandra Rubio, my travel agent, had another question for me.  Which Club Med do you want to go to?  While there are Club Meds all over the world, our prize was limited to Club Meds in the North American hemisphere, so that made it a little easier.  Sandra talked through the choices with me and I narrowed it down to two – Sandpiper Bay in Florida and Punta Cana in the Dominican Republic.

Well, really I wanted Punta Cana, because I’d never been to the DR, but my husband was hoping our nieces and nephews might want to come along and for them Florida was more realistic.  That would have been really fun, but when, after a flurry of phone calls and emails we realized it would be just my hubby and me, that not only decided the where, but the when.  If it was going to be a romantic getaway, then it made sense to go for our anniversary.  We had to wait several days for our preferred dates to be approved, but once they were, we were set to go in May.

Once I’ve pegged down a date, a destination and have an idea of the budget, travel planning really begins for me in earnest, but this trip was very, very different.  I am the Museum Girl.  Punta Cana is not exactly a hot bed of museums.  Punta Cana doesn’t even have one museum.  I couldn’t figure out what I was going to do with myself.

I went to the Club Med website.  It had lists and lists of activities, but they were very active activities, like water sports, golfing, archery and tennis.  That’s not exactly my cup of tea – and yes, I know I’m weird.  There were also amazing pictures of beaches and swimming pools.  That’s not exactly my cup of tea, either.  Yes, I know that makes me even weirder, but it began to dawn on me that I’d just signed up for five days of relaxation and I really don’t know how to do that.

And Then There was Airfare

While everything about our five days in Punta Cana were covered, the airfare was up to us.  We really didn’t think that was such a big deal until we tried to book our flight.  The first big surprise was the number of dollar signs.  I mean the Dominican Republic is just right there on the other side of Cuba.  Why did it cost such a fortune to get there?

The next big surprise was the big, huge price gap between Spirit Air and every other airlines in the world.  It was such a substantial amount that we never actually considered one of the other airlines, but we were a little stuck, because we didn’t think we were Spirit Airlines’ target customers.

It took us a little while to wrap our minds around it, but we booked our airfare to Punta Cana on Spirit.  And then the great wait began without a single museum to research.  Friends who were aware of our upcoming trip would ask if we were ready to travel .  I would smile, shrug and say something pleasant like, “Of course,” “Can’t wait,” or “Sure,” but I wasn’t so sure I was ready for five days of uninterrupted relaxation.

3 thoughts on “The Big Travel Questions”