TRAVEL THERE: A LONG RIDE HOME

It had been a very long day and there was still some left as the bus headed back to Cancun.

The Joy of a Good Book

I had read it before, but even so, I had chosen James Michener’s book Mexico, as my reading material for the trip.  Unlike many of his novels, which begin even before the appearance of man in a locale, this novel focused on a modern day journalist covering a bullfight festival, who was at the same time Mexican, American, Mayan and Spanish.  The book does look back at the ancient residents of the country, but instead of choosing an actual tribe, such as the Mayans, Toltecs, Aztecs or Olmecs to showcase, Michener made up a sort of conglomerate tribe called the Altomecs, allowing him to comment on them all.

So many years had passed since my last reading of the book that it seemed fresh.  Occasional scenes gave me a sense of deja vu, but I was still following the plot with interest, unsure how it would end.  (I still haven’t finished it as I write this post, but the more I read the more I remember, and I have recalled the end.)  On the bus ride back to the Seadust, I was only a third of the way through and the Altomecs had not even entered the narrative, except a brief mention from time to time of the pyramid which was near the primary locale of the story. 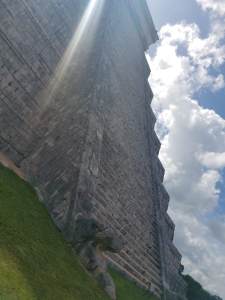 It had been a long day and several times I caught myself dozing off.  At one point, I woke from a dream to discover it was pitch black outside.  I had been asleep for quite a while.  In my dream I was back at Chichen Itza.  I was among the crowds watching the sacrifices, but somehow I was doing so as a character from Michener’s book and at the same time, I was privy to all the knowledge I had accumulated in my actual lifetime.  I stood on the plaza remembering scholarly data about the Mayan civilization, our own lifestyle in America and the many other civilizations I have studied and observed.

When I woke up it took a few moments to figure out exactly where I was.  I soon noticed the guides were fiddling around with the technology.  TV screens folded up and down as if on their own and the guides huddled over a remote control.  I suspected something was up, but they still managed to surprise me with their tequila service.

The interior lights of the bus flashed on as a rather loud rendition of the song “Tequila” played on the loudspeaker.  A man in a strange costume, his face covered with a stocking mask was standing in the aisle.  Though I was pretty sure it was supposed to be entertainment, a part of me was still under the influence of my strange dream.  It wasn’t exactly a pleasant experience, but I understand they intended it to be.

Bill had a little tequila, but I had no interest.  My stomach was ready for its next meal and had no interest in alcohol.  We were soon back to Cancun and we were fortunate enough to be the second stop.  Unfortunately, the first stop was the Iberostar which had refused Bill entrance the previous day.  Before the night was over, I was also wishing we could visit the Iberostar!  Come back next week and find out why!

2 thoughts on “Back on the Bus”