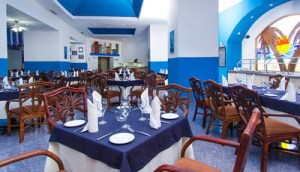 Hungry, thirsty and exhausted we had no desire to visit the room before having dinner.  Seadust’s website promised an Italian restaurant with a focus on seafood and that sounded good to us, but we couldn’t remember the name of it.  The only restaurant with a lobster tank in it was The Lighthouse, but the pirate-themed decor left us wondering what made it  Italian.

There is a Small Wait

It was about 8:30 and all the restaurants were busy.  The Lighthouse had about a 20 minute wait, so we left our name on the list and made the rounds of the area to see if anything else looked more promising.

That journey ate up about half our waiting time, so we made our way over to the bar we had visited the night before.  We grabbed some wine and cheese to hold us over until the The Lighthouse could seat us.

The Lobster Tank and Other Disappointments

Front and center in The Lighthouse is a lobster tank, announcing the seafood opportunities awaiting its patrons, but like the wines offered by the previous day’s supercilious sommolier, a significant surcharge accompanied the enjoyment of the crustaceans.  First strike!

The menu provided the answer to why the restaurant thought it was an Italian place, but you really had to read between the lines of the  poor translation to figure that out.  Nothing really sounded like what we imagined we might be served, but we settled on some choices.  Bill picked some kind of fish and I went with some fried seafood.  I’ve learned when the menu is a little shaky, go for either the mixed grill or something fried.  My dish was kind of a deep fried mixed grill but it would have to do.  This was more like a foul ball, rather than a strike.

Instead of appetizers, The Lighthouse offers a “salad bar.”  OK.  I went to check it out, because Bill didn’t want a salad.  There was a bowl of greens, but most of the choices on the “salad” bar were cold seafood options – large prawns, crab claws and other selections.  I came back to the table with my prawns and crab, which inspired Bill to try the prawns.  Strike two!  The prawns were overcooked and the meat of the crab claw did not justify the extreme measures required to get to it.  I’ve eaten crab claws my whole life.  I had never faced an enemy claw quite like these.  The shell of the crab was like a concrete casing and after you labored to get to the meat, it wasn’t very good.

Our entrees arrived and it was another foul ball.  Mine was adequate.  You can get better at the Golden Corral, but I was hungry and it was edible.  I don’t think Bill’s entree could even be called adequate, but he did try to eat it.  All the while, Bill was Googling the Iberostar and the other accommodations in the Hotel Zone.  He decided then and there that all-inclusive would no longer be in his vocabulary!

To finish the meal, there was a dessert bar. Strike three. It did have desserts, but nothing we couldn’t have gotten our hands on in the dreaded buffet.  I chose a few small items, but Bill walked away.  He walked right over to the Maison d’Michelle and arranged for us to have dessert there.  He impatiently waited for me to finish the little tarts I’d picked up and then we revisited the duck chunk restaurant.  They served us two desserts and Bill ate both.

I was exhausted.  I was also sick and tired of hearing about the shortcomings of our resort.  Just because I didn’t waste my energy cataloging the irritants didn’t mean I was oblivious to them, but it also didn’t mean that I had to be disgusted with the whole vacation.  I could still have fun.  We returned to the room and I went directly to bed.  Things did get better the next day, but unfortunately, not in the restaurants.  Come back next week and see what I mean.

6 thoughts on “This Is an Italian Restaurant?”