TRAVEL THERE: A DEFINITELY DELIGHTFUL LAYOVER

No matter how pleasant an Atlantic-crossing flight may be, I need a break when it’s over.  Hanging out in an airport may not be the most fun I can have, but it can be some fun – and this time it was.  It had been a while since I’d been to Heathrow and I have nothing but nice things to say about it.

Our bags were checked through to Cairo, which was a blessing, but we had to change terminals.  That’s never fun.  At Heathrow that means you take a bus to the first terminal, follow the purple signs forever, take another bus to the other terminal and get delivered to a skillfully-organized dime-dropping opportunity.

After our brisk walk following the purple signs, I was ready for lunch.  We arrived in the departure lounge and were a bit overwhelmed.  This place is a shopper’s paradise and they have some pretty good food, too.  After checking out the possibilities at the terminal map, we made our way to a place that sounded sort of pub-ish.

One nice thing about Heathrow was their choice of restaurants.  You weren’t stuck with your usual food court choices.  I was craving authentic fish and chips, so we made our way to Huxley’s, described on the Heathrow website this way: 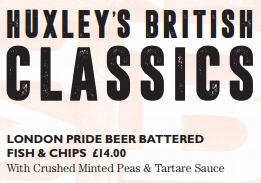 I had to look no further than front and center on the menu to figure out what I wanted and Huxley’s did not disappoint.  The British Classic was everything my taste buds had been craving – and the minted peas?  Marvelous!  Bill had some sort of sandwich and a beer.  I wanted a beer, but I opted for a diet soda instead.  I was still trying to watch my weight at that point and I was busting the calorie budget with my beer-battered fish.

As we waited for our food to be served we observed what others were having and admired something called an Eton Mess as it was delivered to another table.  Fresh strawberries, crushed meringue, whipped cream and ice cream.  What was there not to like?  We toyed with the idea of finishing our meal with the same, but there was no room in the tummy after I inhaled all the gorgeous fish and chips. 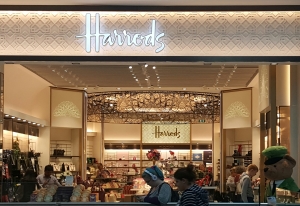 To me, the star of the shopping mall was Harrod’s.  Not only is it a British classic, the space it occupied was spectacular.  I saw at least six things that I wanted to come home with me before I even entered the shop.

Bill was attracted to the duty-free shopping.  That’s where he discovered that I had been right about the Jack Black Scotch.  We could have bought it for a great price at the airport and not had to sacrifice pounds in our luggage. 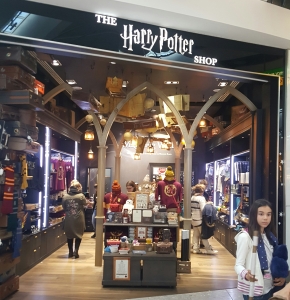 There was another little shop that represented another brand now associated with all things British.  I’m not a Hogwart fan, but I had to take this picture for Hannah Beth.  We were able to enjoy both floors of the Heathrow Terminal 5 shopping opportunity before they posted our gate on the departure monitors, but we managed to keep the credit cards in our pockets.

I caught up on my travel journal – it’s always quite detailed in the beginning, but by the end of the trip I’m not such a faithful diarist.  I wandered around a bit, trying to take advantage of this chance to stretch my legs.  I also made my pre-boarding potty stop.  That’s when I found this guy biding me farewell and  I couldn’t resist capturing him for you.

Our flight was called and we boarded.  Come back next week for our exciting arrival in Cairo!