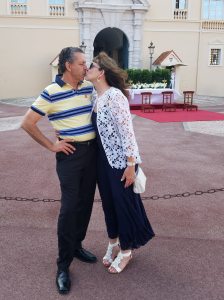 TRAVEL THERE: THE GRIMALDI’S PRINCE’S PALACE

Black SUV’s whisked us from the Yacht Club to the Palace.  That’s probably the last time I’ll be able to say something like that about my own travels, so perhaps it was worth the splurge.  Since we weren’t actually VIP’s, they parked about a block away, near the Cathedral and we strolled over to the palace.

Virtually anyone can make day visits the palace during the summer and fall, as long as it’s not Grand Prix weekend.  However, the tourists are shuffled off at closing time.  We had after-hours access, which means we went to the same places, just at a different time. 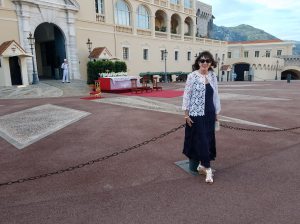 For Americans, this palace is almost a must-see, because evidence of our own American fairy tale, Princess Grace of Monaco, is in plain sight.  Having just watched a Hallmarkish commoner-meets-and-marries-a-prince movie last night, I know we are still very much in love with the story of this lovely lady. 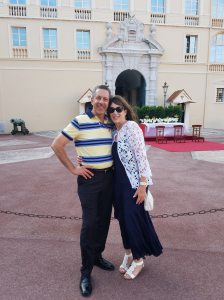 Before and after the tour we were welcome to take photos of the outside the palace.  The red carpets and kneelers are not part of the every day look.  They were setting up for some kind of religious ceremony and around the corner at the cathedral there was a lot of activity, so no telling what that was about.

All that was left was to get back into our SUV’s and travel back to the ship.  Our day in Monte Carlo was over.

Grabbing a Show and Dinner and a Show

Back on the boat, Deb, Bill and I went to Hype with Marcus Terrell at the Theater.  We weren’t much impressed.  His greatest asset was volume, but he was surrounded with lots of energetic gyrating dancers.  Nothing as fascinating as Hot Summer’s Night we’d seen a day or so ago.

After the show, it was time for dinner and all of us met for dinner in the Cosmopolitan.  It was the same menu they had offered for their embarkation lunch.  This is the weakness of their dining plan.  Sure you have a variety of dining rooms, but once you’ve eaten in one, there’s no reason to go back.  That’s probably because they are trying to encourage you to drop a few bucks in their specialty dining rooms, but with all we’d spent already, that wasn’t happening.

Our companions were ready for bed when the meal was over, but Bill and I wandered into the Club and saw an acrobatic show called Mirage.  It had some good parts, but their tricks all began to look the same after awhile.

Still not ready to call it a night, I pulled the daily newsletter out of my purse and unfolded it.  They had something called the Color the Night White Party happening on the Resort Deck, so we decided to check it out.

I don’t know about you, but I am just about done with the whole White Party thing.  Isn’t it time to let that one die a natural death?  The Edge was trying to jazz it up some, with a variety of colorful lights, but as you can see, it’s a pretty dead scene.  I must not be the only one tired of White Parties.

I think if there had been anything else to do, we might have continued to wander, but it seemed the ship was rolling in its sidewalks – unless you wanted to sit in some bar and rack up some beverage billing, so off we went to bed.

The next day our stop was Cannes.  Come back next week and I’ll share my favorite shore excursion with you.