Turn up the volume and enjoy the ride.  We had a blast on our own self-guided tour of Schnebly Road.

Since Bill was into savoring on this adventure, I took advantage of it to get a few photos.  Just past Red Rock National Park, where the spectacular formations cluster, there’s a place called Hillside Sedona.  We were also looking for a snack, but in the middle of the afternoon, pretty much everything was closed.  We did, however, get these great shots.

From there we drove to Schnebly Hill Road and initially we were underwhelmed.  I was just another small road, unpaved but covered with gravel.  This was our 4 Wheel adventure? 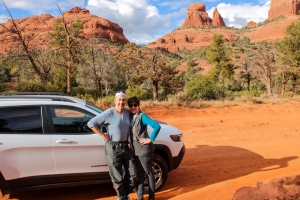 Bill was not impressed and he wasn’t savoring it at all, but I showed him how the map indicated there was some normal road before the broken line that was “Schnebly Road Requires High Clearance Vehicles.,” so he decided to hang in there.  Good thing.

To our delight, the road got worse and worse and worse.  Bill was in heaven.  Most of the vehicles on this part of the road were open-aired Jeep Wrangles with jacked up shocks, leaving them plenty of room to cruise over the rough spots.

We were in the more sedate Jeep Cherokee and that rental car might have hit bottom a time or two before we were over, but we were having a great time.  Here’s some of the road we tackled. 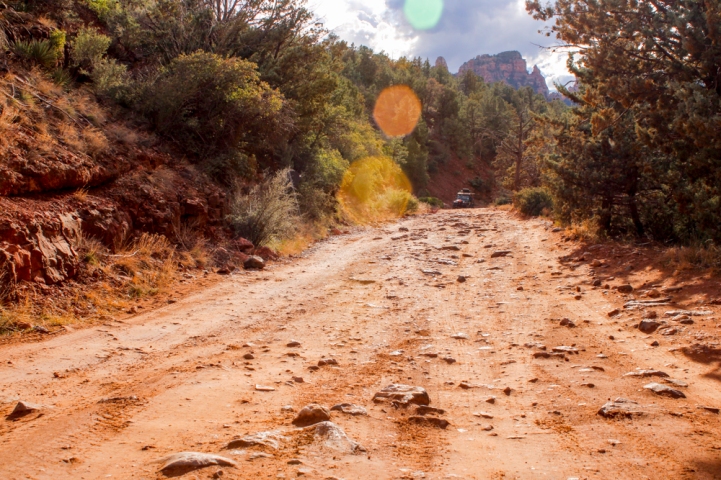 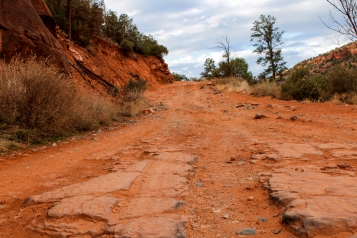 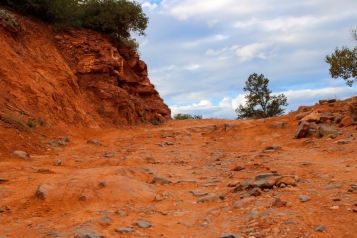 While some of you guys might consider this pretty lame 4 wheeling, we were having a blast.  We’re city folk and the biggest excitement we get driving around most of the time is an overlarge pothole in our flat Texas landscape.  Yahooo!  We were living large.

We kept on going on down the road until we came to a sign informing us that the rest of Schnebly Road was off limits due to it being out of season.  Drat.  We had to turn around and do it all again and some of it was more exciting heading back than it had been coming in.  Several open-aired jeeps passed us going in and coming out, but we couldn’t have had more fun if we’d been their passengers. This was definitely a highlight of the trip. 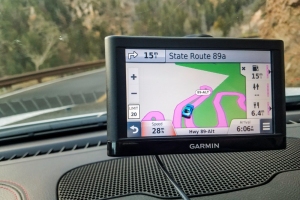 The gorgeous sky disappeared and sprinkling rain threatened worse conditions, but we were still in adventure mode.  I’d missed Oak Creek Canyon on the way to Sedona and now we had time to visit.  I consulted the map pointed took over driving from Bill.

The next time we head to Sedona, and I swear it will be sooner rather than later, I want to stay in Oak Creek Canyon.  Nestled in by high red cliffs on both sides, Oak Creek meanders along trading sides with the road about halfway along.  Cute little motels, cabins and campgrounds are sprinkled along the length of the canyon.  I imagine staying in any of them would be quite a treat.

Then you start to climb out of the canyon on a series of exciting switchbacks.  You can see from the GPS the twists and turns you encounter.  The ride was thrilling, which was a good thing, because when we got to our destination, the overlook, it had just closed and sleet was starting to come down.  We weren’t able to visit, but we were having fun.

The day was getting dark and with the weather getting messy, I was done driving. Reluctantly, Bill took back over and headed back to Sedona.  My job was to investigate possible meal opportunities.  Come back next week and see what we did.