TRAVEL THERE: PIZZA IN THE PIAZZA

Though I deemed it worth the visit, Capri had been very hot and very crowded.  Now, we had ferry ride back to the mainland.  That’s OK, we all needed a nap.

It wasn’t a jet foil we took to Sorrento.  It was much larger and all the seating was downstairs. It was pretty much superior in every way you can imagine.  The hordes of Asian tourists we’d had with us on the way to Capri were nowhere in sight and no one, including Bill, was sea sick.  He didn’t take any chances, though.  He closed his eyes as soon as he boarded, so he was the first of us to fall asleep.

Though Bill fell asleep first and stayed that way longer than any of us, he was not alone.  We were all snoozing.  Bill just happened to be the only one I caught with my camera.

Like Capri, Sorrento was a bit of a logistical challenge.  There was a small part of the village down by the shore, but the part we wanted, the Old Town was up a pretty steep road.  So, we trotted from the dock to a small square, where we waited while Paolo went for our transportation.  We climbed the hill in a small van and minutes later we were on another small square.

We were whisked from the van to a shopping opportunity, disguised as a craft demonstration, only everyone saw through the ruse.  It was a woodworking shop where they did elaborate wood mosaics.  We stood politely through the demonstration and appreciated the lovely merchandise, but no one in our group had come prepared to purchase a convert-able gaming table or a huge grandfather clock.  The establishment did offer restroom facilities, but our group took care of that on the ferry.

It seemed Paolo was impatient with these “shopping opportunities” he forced on us, but it’s all part of the tourist game and we appreciated access to nice toilets.  Once we were released from the shop, we were given free time for eating and shopping. 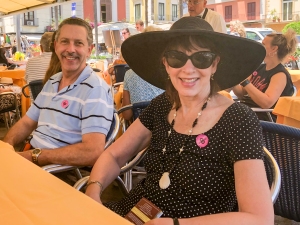 The Value of Proximity

Right next to the shop was a restaurant with a nice patio.  We were thrilled to take a seat under it’s awning and relax on dry land.  We ordered up cold Bierra Morettis and hot Napoli pizza.  They served french fries with the pizza, which we thought was weird.  However, we were hungry after our long hot morning and nap, so it didn’t matter.  We compared notes about the cruise so far and had some of the best moments we’d had yet.  I’ve included a video to prove it.

Soon it was time to load up on our bus again.  Our next destination was Pompeii.  I longed for one of those private early morning tours of the site, which avoid the heat of the day and the crush of tourists, but we only had one day in Naples and I was glad I had not missed Capri or my piazza-side pizza in Sorrento.

Enjoy the short video and get a feel for the enjoyable time we were having.  Then come back next week and we’ll look at the ancient ruins of Pompeii.