TRAVEL THERE: GENEROUS AND GRACIOUS SPACES

Since I’d won our trip to Club Med from CTC Travel, we had no idea what kind of accommodations to expect.  How bad could things be at a five star resort, right?  Still, I’ve usually pored over the available information and carefully selected our rooms to be as economical as possible, while providing what we need.  We made out just fine in what they provided – in fact, better than fine. 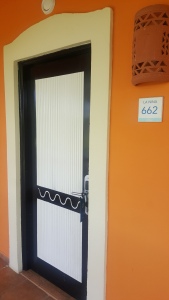 I can’t speak for the rest of the rooms in any of the other buildings, but I can tell you 662 La Nina is a nice place to stay.  When you enter the door there is a hallway.  On the right is a room with a toilet and next to it is another room with the balance of the bathroom facilities, a huge walk-in shower and a large two-sink vanity.

On the left side is a huge, and I do mean huge, closet.  Along with plenty of hanging space and hangers, there were two stacks of roomy shelving.  If I would have had my druthers, I would have preferred a dresser with drawers, but that’s just me.  The shelves worked fine.  There was also a shelf all around the top of the closet that was great for hats and such.  There was room for everything and to spare.

The room came with some equipment, a hairdryer, a frig, a coffee maker, an iron and an ironing board.  There’s also free wi-fi, not the fastest in the world, but more than adequate for the usual stuff. The Dominican Republic is on the same power grid as the US, so they had the same kinds of power and plugs as we do.

After you get past the bathroom facilities and closet, the room opened up.  To the right was a nice bed, queen-sized, I think.  It seemed a bit smaller than at home.  To the left was a secondary space with two sofas that could be made into beds.  We didn’t have to guess that this was great for families, a pungent smell told us someone had recently had an accident there.  As soon as we notified housekeeping they took care of it, but they had points taken away for it nonetheless.

There was also a nice balcony.  I wasn’t really roomy, but there were two chairs, a table and an ashtry, which we no longer see in America very often.  I spent some quality time out there, but had to be careful to wear socks, because if my ankles were bare, some invisible pest would begin to gnaw on me.

We were very comfortable there.  The rooms are not what I consider luxurious, but they weren’t spartan either.  Nicely, but not opulently furnished – it was a beach resort after all.  We especially appreciated the bonus room.  I’d retreat there in the mornings before Bill woke up and he liked to enjoy his online games there.  We slept well every night without any interruptions.

We also walked a million miles or at least it seemed like it!  La Nina was sort of in the middle of the cluster of buildings with rooms.  I’m guessing there is a premium to pay for rooms which were closer to the entertainment section, but there were buildings which would have doubled our steps taken.  I hope they are a bargain.

At the reception area they tell you that you can call whenever you like and a cart will come and transport you back and forth.  On our first day we tested that theory and attempted to grab a ride to our room.  So, had everyone else on the property.  Well, not everyone else, but enough someone elses that we weren’t going to wait – especially when we watched an aggressive group jump on a cart and zoom away, rather than allowing the ladies who had been waiting ahead of us to take it.  In other words, we didn’t plan to fight that battle on a regular basis.  While I did see a lot of carts whipping around the property, it was rare for them to have guests as passengers.  Usually they were toting bags or equipment.

So that’s it for our accommodations.  Come back next week and we’ll go to breakfast.

1 thought on “Our Club Med Home Away From Home”