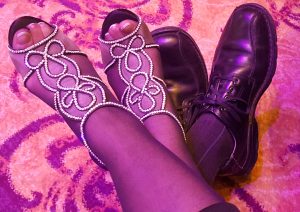 TRAVEL THERE: PUTTING ON THE RITZ

I love dressing for dinner.  It’s not required on most cruises anymore.  They discourage you from wearing flip flops and tank tops, but pretty much anything else goes.  Even on formal night dressing up is optional, but I dress up every evening and on formal night I pull out the stops.

I can only imagine how much the captain hates formal night.  He has to get all dressed up, spend an hour or so shaking hands and taking pictures with skads of people he has no interest in and then he has to get up and make a big welcoming speech.  It was probably fun the first hundred or so time, but he does this week after week after week!  He probably realizes that most of the people are just there to get the free champagne.

Then after he makes his speech he has to introduce his management staff and let them make their own speeches.  How would you like to take the top management out of your organization to entertain a crowd that just wants free champagne?  Yeah, who’s running the boat – right?  It was almost impossible to hear what they said, but as long as the trays of champagne wandered around the room, they had an audience. 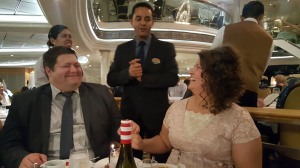 Happy Birthday, Anniversary and Everything Else

Since this cruise was to celebrate Bill’s birthday, our travel agent asked which evening we’d like commemorate the occasion.  I chose Formal Night.  Bill’s birthday wasn’t the only celebration at the table.  The Youth Pastor and his wife also got feted for their anniversary.

Our table mates were a blast, so we were grateful for the delightful company.  The food continued in it’s mediocrity.  This was the night of the lousy lobster bisque and I followed it up with a steak.  Nothing to write home about.  One more meal down. 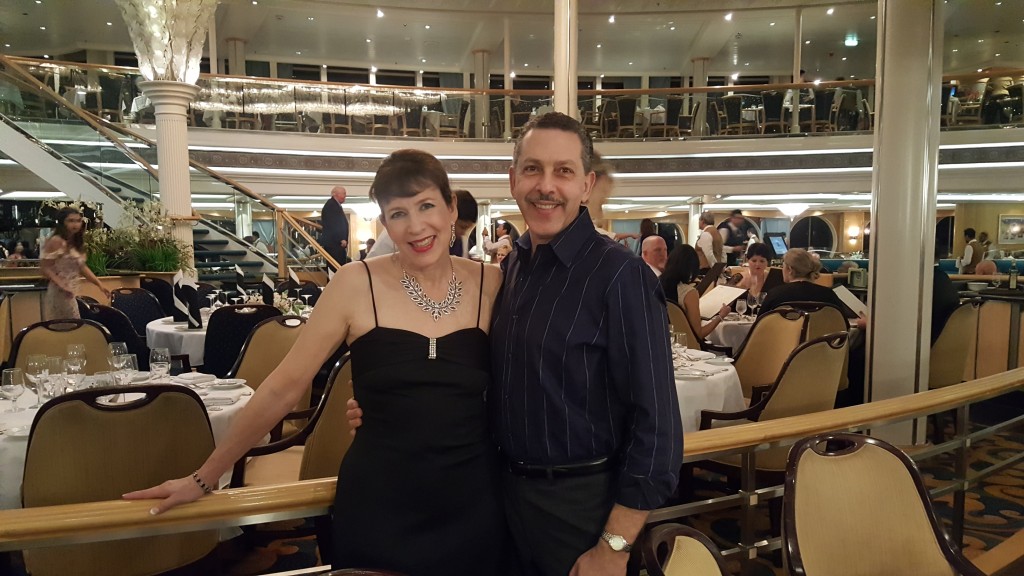 Another Show, Another Disappointment

For formal night the entertainment was Boogie Woogie Wonderland, which was supposed to highlight the music of the seventies.  They were a little loose about hitting their target.  The seventies were my boogie woogie wonderland, but I have no idea what inspired some of the costumes they wore.

The songs they chose to highlight were among some of my favorites, but the voices just weren’t up to the challenge of the music.  Overall, it was an entertaining show, but it just came up short in the quality department.

To top off our night, after the show we headed to the Some Enchanted Evening Lounge for The Perfect Couple Game Show.  We were expecting a “Newlyweds Game” knock-off, but instead got the Embarrassment Olympics.

When we arrived Adult Karaoke was still going on.  There was a group of drunken bridesmaids dominating the room whether they were on stage or not.  I was glad when the spectacle was over.

Instead of a Q&A of martial habits, The Perfect Couple was a series of party games designed to embarrass people who were unwitting enough to volunteer to be contestants.  Why pay entertainers when you can get passengers to entertain everyone with karaoke and awkward feats of skill.  We made it through a few rounds, but when they started with tennis balls in men’s jeans, we decided it was time for bed.

Come back next week for sure, because we arrive in the Yucatan and enjoy a marvelous shore excursion.o