TRAVEL THERE: VISITING THE STEP PYRAMID

The Egyptians didn’t wake up one morning and have the perfect formula for pyramid building.  They had hundreds of years of practice before the elegant examples at Giza were built.  (There’s a nick in the Ancient Alien theory!)  At Dashour we saw pyramids of various shapes and sizes.  Their most successful attempts led them to give step pyramids a try and the best example of these Step Pyramids is up the road a bit from Dashour and down the road a bit from Giza at Saqqara.

When we departed Dashour, our military friends didn’t seem quite so intimidating.  They barely glanced at us as we passed by.  Izzat got back on the main road, the one with the dirty canals in the middle, and headed back north.  Zuzu continued to regale us with the history lesson and before long we were at another military installation.  This one was not quite as intimidating, but to a certain extent a little more scary.  The soldiers at Saqqara were a little less serious, but also a lot more careless.  They all carried guns and seemed to be having several different conversations, and in each the guns were being casually waved about as if they were extensions of the gesticulating soldiers’ arms.  I couldn’t help but wonder what would happen if someone’s finger slipped a bit.

If you don’t count the threat of wayward bullets, the site seems more tourist-friendly.  In Dashour everything was a street and a parking lot because it was just wide open spaces for as far as you could see.  At Saqqara, there were actual gravel-covered parking lots and roads that looked regularly traveled. 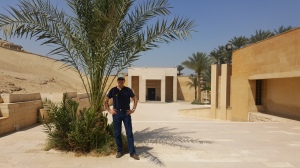 Another tourist- friendly feature was a small museum.  There’s actually a lovely promenade from the parking lot to the museum that looks as if it could accommodate a gift shop, a concession stand and perhaps even a small cafe, but everything was closed down tight and no signs indicated that any of it had ever been anything.  I wondered if there had been more there once or whether they were presently developing it, but Zuzu did not provide that kind of information.  He looked at me as if I’d suddenly begun to speak a language he didn’t understand and shrugged his shoulders.

We grabbed a few pictures and headed inside.  This had to be a recent development, because the interior looked like something you might see in other countries.  It was clean and neat.  The items were advantageously displayed in glass cases and lo and behold, there were placards there to identify the pieces and give a little history.  Pictures were not allowed or I would be glad to show you the lovely facility.  The museum was not large, but I liked it very much. 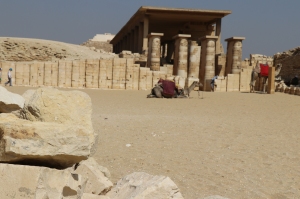 Saqqara is a significant archaeological site.  They have found a number of ruins dating to a variety of periods.  Some have been restored.  Some look as if they were once available for viewing, but have been closed up. Some areas are currently under renovation.  Even though the ruins come from different eras they are all very close together.  You can see everything without having to walk very far.

I’d say of the three Pyramid sites, Saqqara was my favorite – not more important than Giza, but more enjoyable.  Each is worth a visit.  If you can convince your guide to do them in chronological order, then kudos to you.  I think that would be an interesting progression, but that guide would not be Zuzu.  He’s going to do Giza first, no matter what. 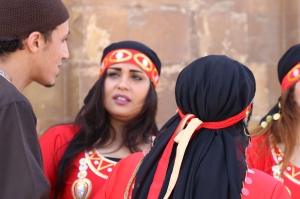 As if to prove they’d gotten the tourist thing figured out a Saqqara, they actually had a cultural performance!  A toupe of dancers, both male and female, performed energetic renditions of folk dances, brandishing swords, swaying their hips and stomping their feet.  The colors were a little too Hollywood to be traditional, but I appreciated the effort.

The drive back to the Mena house was daunting.  It was five o’clock traffic Egyptian style.  I was appreciating Izzat more and more.  Back at the hotel we did a little exploration, wandering around at will.  We’d been on the official tour and they encouraged us to wander the hotel – so we did.  We also had another fantastic meal, this time at the Khan-il-Khalili restaurant which specialized in Egyptian cuisine.  Back at the room I packed up.  In the morning Izzat would be there fairly early to take us to the airport for the next phase of our adventure.

3 thoughts on “Step Up to Saqqara”