TRAVEL THERE: BULLS-EYE ON BRICKTOWN – LOOKING FOR FUN IN OK CITY

It’s about three hours to Oklahoma City from Dallas and we needed every minute of that to shake off all the frustrations which tried to keep us from leaving town.  Deb and I both needed this trip.  We were seriously devoted to radical attitude adjustment.  That’s why we put the pedal to the medal so we could start our adventure in Bricktown.

Though we were on our way to Wichita KS for a Women’s Ministry Event we were determined to have some fun along the way.  Bricktown was a great place to start.

Oklahoma City is a conglomeration of several interesting neighborhoods and I thoroughly recommend giving yourself several days to visit the city so you can enjoy them.  Bricktown isn’t a neighborhood though.  It’s an entertainment area.  There’s a baseball stadium, tons of restaurants and even a Riverwalk.  It’s not exactly San Antonio, but it’s well worth your time.

Deb and I blasted into town, threw our stuff into our hotel room and headed to Bricktown.  Along the way, Deb read through some of the brochures I had on the area and decided The Mantel Wine Bar & Bistro sounded like our kind of place.  Boy was she ever right.

There was still daylight left when we got to Oklahoma City.  The GPS took us close to our destination but construction thwarted Nancy the Navigator’s efforts to get us to the restaurant.  After a little wandering around, Nancy decided she knew where she was again and she delivered us to the front door.  The exterior of the building is nothing to write home about, but there was a parking space right out front so we felt like we’d come to the right place.

The moment we stepped inside all hints of sunshine disappeared.  The place has a clubby, steakhouse vibe.  We were seated at a banquette.  I can imagine that being romantic for a couple, but Deb sat on the upholstered seat and I opted for a chair across from her.

The waiter promptly arrived and offered drinks, but we hadn’t figure out our game plan yet, so he left us to peruse the menu and wine list.  We decided to share an appetizer and an entree.  The entree was fish, so we chose a nice bottle of white to go along. 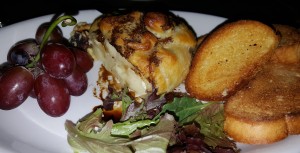 I obviously left my bad luck in Dallas.  The wine selection was crisp and refreshing.  The appetizer was to die for.  Baked Brie is one of our favorite things in the world and when Mantel’s version of it was put down in front of us we wondered why we didn’t order two.  It looked perfect and tasted even better.

The entree was every bit as good.  The grilled mahi mahi was cooked to perfection and rested atop a scrumptious risotto banked by stalks of grilled asparagus.  The more we ate, the more we wanted, so we allowed the waiter to show us the dessert menu.  Everything sounded amazing so we asked for help.  Before we could finish the question he took the dessert menus out of our hands and told us we wanted the Lava Cake.

I’m sorry to report that I failed to get a picture of the dessert.  Two balls of ice cream were served next to a large ramekin of chocolate stuff.  He told us it was hot, but we just had to dump it out on the plate to mix with the ice cream.  The poor waiter nearly fainted when he came back to find us trying to handle the ramekin with our napkins.

The waiter whipped up our plate and disappeared.  He returned moments later with our freshly dumped lava cake rolling around among the ice cream balls and he was obviously amused.  He told us we were the first patrons he’d ever seen try to attempt the feat.  We reminded him we’d warned him about ourselves.  He laughed and confessed he’d been very wrong about us.  He’d pegged us as salad-with-a-glass-of-wine types.  Then we’d ordered a bottle of wine, an appetizer, and an entree.  He hadn’t been surprised we also wanted dessert, but us playing hot potato with the lava cake had made his evening.

A Stroll Through Bricktown

Oklahoma City is not exactly the Big Apple and Bricktown on a Thursday night with no baseball game is a ghost town.  Still we decided to wander down to the Riverwalk and take a stroll.  I imagine that it can be a pretty exciting place to hang out, but it was eerie to be the only ones down there.

With nothing to distract us we went back to the car and returned to the hotel.  We had a fun day ahead.