Welcome to Oregon! Well, sort of. This past summer my husband and I spent twelve days traveling the state and now I’m sharing the experience with you. I’ll tell you about the attractions we visited, the meals we ate and where we stayed. Maybe you’ll decide you want to visit Oregon, too. Today’s focus is The Maryhill Museum of Art, just across the Columbia River Gorge in Washington State.

Plnning for Maryhill Museum of Art

I grin every time I think about this museum.  Traditional travel wisdom tells you  when you’re traveling west from Portland you should turn right at Hood River and head towards Mount Hood.  Instead I continued on to The Dalles so I’d be near Maryhill Museum of Museum of Art.  The price was a particularly bad meal, but well worth the inconvenience.

and Travel Planner.  I mentioned that The Dalles has the Columbia River Discovery Museum and it was originally the target of my visit to The Dalles, but thanks to my trusty atlas I also googled all the nearby towns on either side of the Columbia River.  One click on www.maryhillmuseum.org and I knew dioramas of the Lewis and Clark expedition had just lost their priority.

Remember old Sam Hill?  Well, he started a town and a palace out in the middle of nowhere and named both of them

after his wife Mary.  Then two things happened.  The town faltered and failed due to irrigation challenges and Mary never cottoned to the state of Oregon. (Perhaps it was because Maryhill was actually across the river in Washington!)  She visited for six months and then hightailed it home to Minneapolis with his two kids.

Well, I guess old Sam loved Oregon more than Mary, because he stayed, in spite of the failure of all his Maryhill plans.  He poured so much love into the state of Oregon that he actually died on his way to address the Oregon legislature.  However, one can’t help but wonder if there was more than a distaste for the wild west lifestyle that sent Mary back to Minneapolis.  The rest of the story of the museum is filled with a queen, a dancing legendess and a sugar-fortune wife who helped Sam turn his failed mansion into an irresistible jewel box for the general public.  There’s nothing to suggest that the crusty old Quaker was in any way improper with his lady friends, it’s just odd that they were so passionate about turning an out-of-the-way unfinished home into a museum.

And what a museum!  Crown jewels, palace furnishings, modern sculpture, amazing photography and awesome paintings.  I thought we might spend an hour strolling through the house.  Instead we were there for hours, eating lunch in their snack bar and then returning to the collections.  The wild variety of things provides much of the charm.  The items also give an interesting panorama of life in the early twentieth century.  I won’t bore you with a laundry list of the collection.  The museums website can give you a good idea of what to expect, but I assure you, even when you know what you’re going to see, the impact of it is still startling.

A Replica of Stonehenge

But that’s not all.  Old Sam was quite the traveler.  (How else would he have met the

queen of Romania and a Parisian dancer?)  His pacifistic Quaker heart was burdened by the loss of young lives in World War I and during a visit to Stonehenge he decided to do something about it.  Back in those days prevailing scholarship believed Stonehenge was the site of human sacrifice (which shows you how much you can depend on the current prevailing scholarship) and Sam decided by building Stonehenge in the west he could draw a parallel between the useless loss of life in war.

So right down the road from Maryhill Museum, you can visit Stonehenge.  The World War I reference is not as poignant now that we better understand Stonehenge, but that does not decrease the wonder of standing among the standing stones of Maryhill, Washington.  The view of Mount Hood is pretty amazing, too.

So do go to Maryhill Museum of Art.  I’d say it was worth the trip even if everything else about the area wasn’t so sightseeing worthy.  I’ve put it close to the top of my list of favorite museums.  I can’t resist sharing some more shots with you – everything was just too gorgeous.  Come back next week for another slice of Oregon that you’ve probably never heard of, but will completely love. 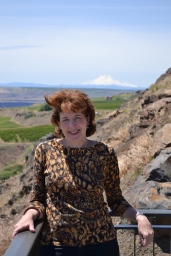 Mount Hood from the Maryhill Museum snack bar balcony. The food was delicious! 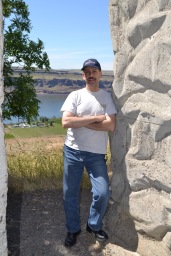 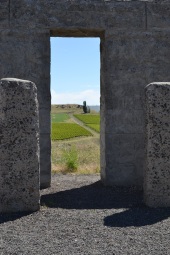 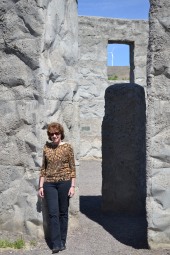 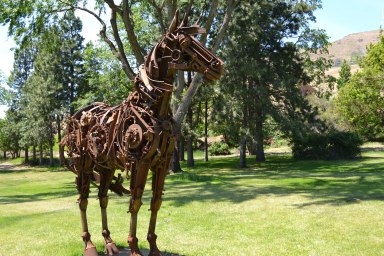 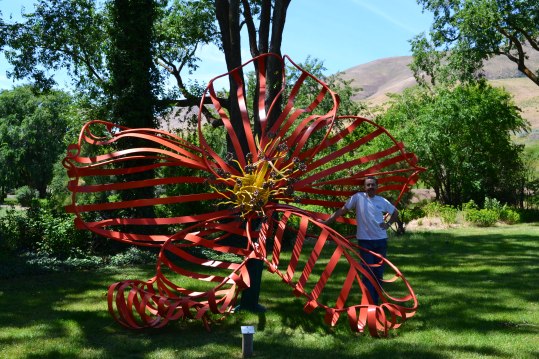 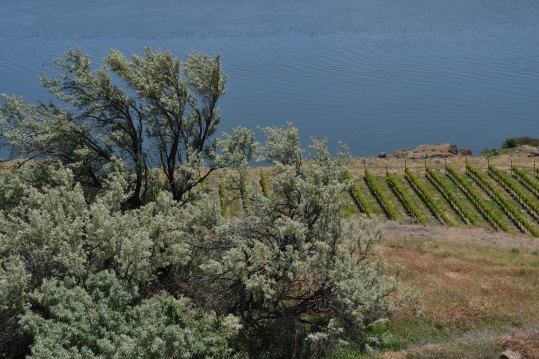 This picture proves that with a little irrigation at the right time, Sam’s dreams might have come true, but then the world might be poorer by at least one museum.
45.677491 -120.864779