TRAVEL THERE: THE REST OF THE VOW RENEWAL CEREMONY

Enjoy the slide show, it is formatted for your phone, because according to statistics, that’s where most of you are reading this blog.  The images show you how perfect the setting was, how much fun we were having and how well we all cleaned up.

Each of my friends contributed to the ceremony, by reading a verse from the beautiful cards I had made for them.  They kept their card as a souvenir and the cards we read our vows from are in my scrapbook of the day.

Trust in the Lord and do good;
dwell in the land and enjoy safe pasture.
Take delight in the Lord,
and he will give you the desires of your heart.

Commit your way to the Lord;
trust in him and he will do this:
He will make your righteous reward shine like the dawn,
your vindication like the noonday sun.

Be still before the Lord
and wait patiently for him;
do not fret when people succeed in their ways,
when they carry out their wicked schemes.

Refrain from anger and turn from wrath;
do not fret—it leads only to evil.
For those who are evil will be destroyed,
but those who hope in the Lord will inherit the land. 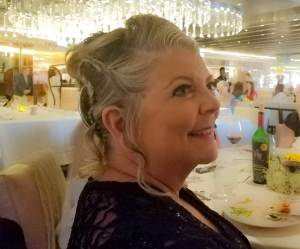 My friend Melanie read from 1 Corinthians 13, which is known as the love chapter:

Jim read one of Bill’s favorite verses about marriage, Ecclesiastes 4:9-12:

Two are better than one because they have a good return for their labor.  For if either of them falls, the one will lift up his companion. But woe to the one who falls when there is not another to lift him up.  Furthermore, if two lie down together they keep warm, but how can one be warm alone?  And if one can overpower him who is alone, two can resist him. A cord of three strands is not quickly torn apart. 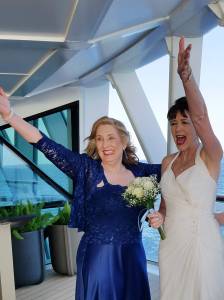 A Highlight of the Day

Then my beloved friend Deborah raised her beautiful voice and sang the special song we’d crafted for the day, and she sang it a Capella.  The music was the romantic song most famously sung by Celine Dion, “If I  Fell in Love.”  It was the song Bill and I danced our First Dance to, at our wedding reception.  However, the words were mine and the voice was Deb’s.

And the moment when you felt that / Magic, wonder, awe/ Is when you fell in love / Always

When you fell in love / It was for forever / A fairy-tale kind of love / Oh, the fairy-tale it never ends

To the photographer’s chagrin, the reception did not offer up all the photo opportunities she hoped for.  There was no cake, because I insisted the included cake be served as dessert at dinner.  There was no garter or other silly traditions.  There was champagne, but not as much as I had ordered.  (See, I knew they weren’t getting all the details right!)  They delivered the champagne at dinner, but that wasn’t my plan.

What the photographer might not have known was that I didn’t want her at all.  Bill abhors the whole idea of professional photography on a cruise ship.  You might think this is odd for a professional photographer, but he’s sees it as just another gimmick to pull more money out of his pocket.   I anticipated him having a meltdown over the cost of the photos and I was right, but that’s for another post.

For now, I’ll just invite you to the Normandie for dinner.  We’ll go there together next week.

1 thought on “With a Little Help From My Friends”