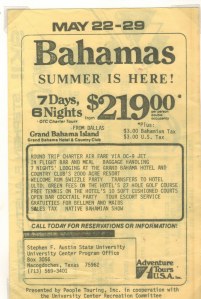 Your eyes are not deceiving you!  Seven days and six nights at an all-inclusive resort in the Bahamas for only $219 including airfare.  Today I couldn’t get as far as Houston on Southwest for as little as that.  Makes me nostalgic for the good old days.

I may have dropped out of SFA, but my SFA friends didn’t drop out on me.  My buddy Debbie was moving to Dallas and along with another friend named Kathi we were getting an apartment together.  Before we moved in though, Deb and I were going to the Bahamas, along with Frances, yet another SFA friend.  In fact, pretty much the whole plane was full of SFA grads and drop outs, headed off for an adventure.  I guess that’s why the tour company was called Adventure Tours.

My mom and dad were well acquainted with both Deb and Frances, so they weren’t worried about me heading out with a bunch of strangers.  Frances and I had been suite-mates my first semester at SFA and Debbie had been my roommate my second year.  She’s the one who talked me into staying at SFA that last summer.

My parents didn’t blame Deb and Frances for me dropping out of college.  In fact, since they had both graduated, I think my parents hoped they’d inspire me to go back to school.  I was the black sheep of that particular trio – or at least that’s what my parents thought. 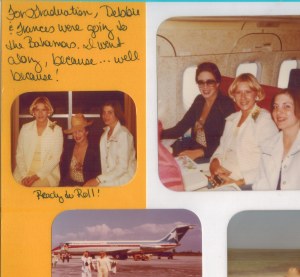 Our big adventure began in Houston, so our first job was to get there and for me, that was also my first flight.  For all the miles of travel I had already booked by the time I was 22, none of them had been on a plane.  My first flight was a quick hop on Southwest Airlines from Love Field to Houston Hobby.  In those days the flight was something ridiculous like $25, but the experience was pretty much the same as it would be today.  Your plane climbs for 25 minutes and then it descends for the next 25 minutes.  However, I’m pretty sure we got peanuts and a soda.  Can you imagine them serving peanuts in today’s hyper-allergic atmosphere?

My next flight was a Texas International flight from Houston Hobby to Grand Bahama Island.  Texas International Airlines doesn’t sound familiar?  Maybe that’s because they merged with Continental in the 80’s.  I was no longer a rookie flyer.  I climbed aboard with aplomb.  This flight was quite a bit longer, though, and we had a meal instead of peanuts.  You probably wouldn’t recognize it as an airline meal.  There was real china, real cutlery and real stemware.  If I had known that kind of service would one day disappear, I would have probably taken a picture with my Instamatic, but I didn’t know.  I also had no idea I would one day be blogging about the flight.  The internet hadn’t been born yet and the going computer language was Fortran.

While many things about travel have changed, arriving in a foreign country doesn’t.  I had dotted all my i’s and crossed all my t’s, but as I stood in line for customs I wondered what would happen if they rejected my paperwork.  I felt that way this year arriving in Punta Cana, last year in Cairo and the year before that in Budapest.  They didn’t turn me away from the Bahamas, nor have I ever had a moment’s trouble, but this was the first time.  However, before I even got to the customs officer, I realized they were barely even looking at the paperwork.  I was waved through without so much as a how do you do.  Our bus was about to leave and they didn’t want us to miss it.

The scenery on the way to the all-inclusive Jack Tar Resort was a little worrying.  We’d arrived in Freeport, but were soon whisked away and all we passed were rural scenes.  I don’t even remember seeing palm trees and we couldn’t see the ocean.  What had I gotten myself into?  Come back next week and find out.