TRAVEL THERE: MORE ATTRACTIONS AT THE GOLDEN GATE PARK

Foiled by the unreliability of the Golden Gate Park Shuttle, Bill and I entered the Japanese Tea Garden. We were unfortunately underwhelmed.

The Trouble with Travel

You know me.  There’s no one who loves travel more.  But travel comes with a price.  The more you do it, the more room for comparison.

Still no Japanese Garden that I’ve ever seen beats Portland’s Japanese Garden.  Two years later, my senses are still reeling from the beauty we saw in Oregon and the Portland Japanese Garden was among my favorite attractions there.  So that should give you an idea of how stunning it was.  (As gorgeous as their Japanese Garden was, it was still my second favorite garden in Oregon.  Crystal Springs Rhododendron Gardens was the best.)

You can’t judge a book by it’s cover and I suppose you shouldn’t judge a garden by the price of admission, but we were surprised by the $7 entry fee.  That’s more than Ft. Worth’s garden, though less less than Portland’s.

The first thing we realized was that the garden was very compact.  Fort Worth’s garden is huge and so is Portland’s, though not as large as its sister in Texas.  Size isn’t everything , but the size does add to the charm, because in the bigger gardens you seem far removed from the every day world.

In every part of San Francisco’s Garden I felt cramped.  I had the sense that just a few feet away was the world, because I could hear it and see it all around me.  There were also crowds of other folks.   The Tea House was humming with business and the line for it wandered through the garden.  Serenity was in short supply.

The sad part was the evident disrepair.  The gardeners are doing a great job, but the park needs to hire a company of carpenters and painters.  Right now – before the wooden structures rot away!  Peeling paint and rotting wood are just unacceptable.  The Tea House has a rollicking business.  Devote some of the revenue to maintenance.

The Rest of the Story

After the Japanese Gardens we waited around for a few moments hoping the shuttle would make an appearance, but it didn’t.  So we wandered over to the Botanical Garden.  Two things kept us out.  It was closing in less than an hour and they wanted another $7.  The last $7 each we spent had not been a good investment.

So we thought we might walk a little.  We headed toward the Cherry Tree Azaleas, got a peek of Stowe Lake and strolled past the Rose Gardens.  We were tired.  It was chilly.  We decided to call it a day.  We weren’t going to get to see all of Golden Gate Park on this visit either.

In spite of the disappointing Japanese Garden, I plan to go back to Golden Gate Park.  I want to see the Conservatory of Flowers, the Dutch Windmill, The Chinese Pavillion, Strawberry Hill, the Carousel and the list goes on.   Next time I’m thinking about bikes or one of those surreys I saw people riding.  I guess next time I’ll need to do a little more research and be a little more prepared.  Third time’s charm, right?

Next week I’ll wrap up my stay in San Francisco, but for now I’ll leave you with a few more shots from the Japanese Garden.  It was pretty.  It just suffered from comparison. 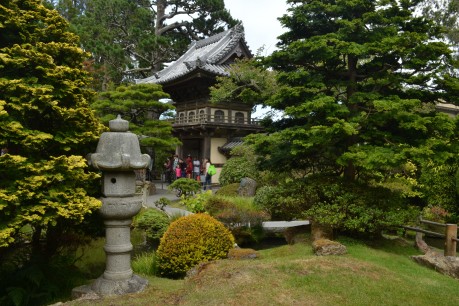 1 thought on “The Japanese Tea Garden and More”