On our final day in San Antonio, the plan was a tour of murals on the west side of the city.  Not exactly the poshest of neighborhoods, but there’s amazing street art.  We decided to drive the walking tour, which was fine for a while – but only a short while.  I recommend bikes.

I, of course, planned several dining options, but was hoping for Mi Tierra –

THE Mexican food restaurant in San Antonio.  (Well, at least one of THE Mexican restaurants.  Casa Rio on the River is pretty high up there, too.)

Mi Tierra has been open forever and it’s always open.  I’d sort of planned on having breakfast there, but fighting the cold weather gave us a slow start, so I moved it into the lunch slot. As many times as I’ve walked by the restaurant during visits to Market Square, I’d never managed to be there when it was time for a meal, but  I kept promising myself that I’d dine there someday.  The patrons just looked like they were having a lot more fun than everyone else in the world.

As if it were ordained by the gods, this time we found a parking place on the street right across from the restaurant and thanks to the cold, there was no wait.  And then, we found ourselves on a patio again, but this one was a lot warmer than the previous night’s experience.  And guess what?  Finally!  Mariachis!

I was tickled beyond pink.  Almost tickled enough to have a margarita, but I’d been so good on my South Beach Diet that I passed up the opportunity, while enjoying every sip taken by the patrons around me.  It was almost as good as having one myself.  Well, not that good, but nice.

The whole place is a perpetual fiesta.  Brightly painted murals, brightly colored pennants, brightly dyed waitress uniforms – everywhere you look is color.  And everywhere you looked people were having a good time.  This was a Friday lunch hour, but the attitude was definitely late Saturday afternoon. 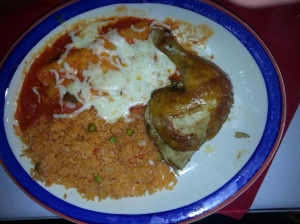 Being the good girl I had chosen to be, I selected rotisserie chicken as my entree, but the good news was that South Beach allows you to have three bites of anything you want and a cheese and onion enchilada came on that plate.  That was the best three bites of the vacation.

Bill chose the special of the day and even though I can’t remember the name of it, I know it was some kind of chicken with vegetables.  He even got to eat the rice and beans.

After Lunch, the McNay Art Museum

As we sat on the patio I just happened to mention the costume exhibit at the McNay.  Bill had previously confessed he really wasn’t interested in it, but he was quite interested in pleasing me, so under the influence of the cerveza, he decided we’d go.  I didn’t jump up from the table and fist pump, but I was tempted.

We paid our bill, stopped to take a few pictures of the bakery case and then headed to the McNay.  I’d rave about the costume exhibit, but it was over January 19th and you’d just hate me for seeing it when you didn’t get to.  Once he got there, Bill was glad he’d been so agreeable.

I’ll leave you with a shot of Mi Tierra’s bakery case, but don’t fail to come back next week, we’re going to the Majestic to see the Nutcracker.