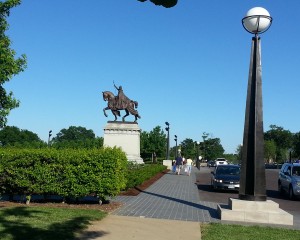 So, when does Dallas get to have a World Fair? Surely if San Antonio merited world attention, Dallas does, too. It seems every time I travel, I run into yet another city that boasts wonderful remnants of a World Fair.  St. Louis is no exception, with its spectacular Forest Park.  The zoo started out as the fair’s aviary and the art museum was the Palace of Fine Arts, but they are just cornerstones left behind and the beautiful park still stands as a tribute to the fair.

Love the Park, Hate the Traffic

However, when we got there around six PM on a Friday evening, we weren’t exactly singing its praises.  Instead of intersections, the park has traffic circles.  If we’d been confused by the traffic coming into town, it was just a sample of what was to come.  As lovely as the park is, I’m sure it’s busy on any Friday night, especially when the weather is perfect, but this night was particularly hectic.

The traffic in the park was bumper to bumper, every parking lot was full and there were people everywhere.  In the midst of all this we had a GPS trying to explain it to us.  I think we circled the park several times before I started trying to read the signs on the side of the road.  As I rode along, I saw wedding guests gathering at the Jewel Box, a African Culture Festival and finally, a Shakespeare Festival.  A bell went of in my head.  I read something about that, but had no idea it was as big a thing as I was witnessing. 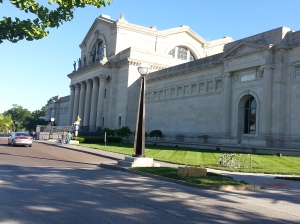 Finally, we found the art museum, but Deb began the process of letting me down easy.  If we couldn’t find a parking place, then we couldn’t see the museum.  This sounded reasonable and I agreed with her in theory.  I think I even said as much, but my heart sank down to my toes.  Then way down the hill and around a corner a place opened up and Deb slid into it.  Looking up the hill at the museum it didn’t seem, as tired as we already were, that we could actually make it up there, but we started trudging up the hill.

Once I made it inside, I wanted to kiss a guard or something to celebrate, but I tried to behave like a patron of the arts should.  The museum is FREE, so you have no excuse for not seeing it if you are anywhere near to it.  We started in the Renaissance and made our way around the entire main floor. One dazzling masterpiece after another thudded into our senses, which had not yet recovered from the glories of the botanical garden.

The Renaissance gave way to Dutch Masters.  Through another door we found Asian artifacts.  Somehow we stumbled into a room full of Impressionists, near some American paintings.  They’d given me a laminated map to find my way around, but I still found myself aimlessly wandering around, mouth gaping in awe.

When we’d swallowed all we could of what the main floor offered, I consulted the map and located the Decorative Arts.  That’s my favorite thing.  Nearly falling down the stairwells, we drug ourselves into rooms full a beautiful porcelains and wonderfully crafted furniture.  I should have started there, but who knew?

From the rooms of porcelain, we crawled down some wooden steps to something that looked like an armory  but around a corner I found the first of the period rooms.  Maybe that’s where I should have started. As I gestured to compare the room to the Reeves collection at the DMA, I set off an alarm.  I didn’t linger at at the French period room.

After I’d inhaled all the decorative arts I could, I realized the museum had another floor, but my brain was dull, my legs were sore and I think Deb would have mutinied if I suggested we go there.  Looks like I’ll have to visit St. Louis again!

The GPS found our hotel with greater ease than it did the art museum.  I’d earned a free night at a Marriot Courtyard with points.  Can you say happy?

But we were hungry.  A friend suggested Westport Plaza would be a great place to hang out, but I wasn’t in much of a hang-out mood.  I was hoping for pizza delivery.  But I could tell Deb really wanted to have a glass of wine and relax in a nice restaurant, so I dug out my smartphone and used Google Local to see what was nearby.  Lo and behold, Westport was all of two blocks away.  I love Deb, but if it had been three blocks, I might have balked.

Join me next week to discover a great Italian restaurant in St. Louis.